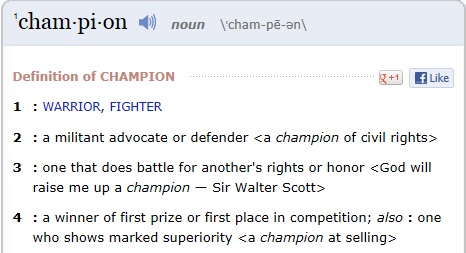 It’s a week to Valentine’s Day and lot’s of people will be celebrating love in most countries accross the globe. We believe you will be celebrating with your spouse in your own way e.g.  by buying cards, gifts or flowers, having a “date night” together or simply spending time together doing what you both enjoy, exchanging words to reaffirm your love for each other.

In order to understand a bit more about champions, we will take a quick look at two champions in the Bible – Goliath of Gath and David.

A search for the word “champion” in the New Living Translation version of the Holy Bible, shows the word occuring nine times, five of which comes from the story of David and Goliath in Chapter 17 of 1st Samuel. In actual fact, all five times, the word is used to refer to Goliath, the champion of the Phillistine!

Whilst much emphasis has been placed on Goliath’s stature and defiance of the God of Israel, I think it’s also important to note that He was prepared to defend and represent the cause of the Phillistines.

David is not referred to as a champion in the text, but the fact that he killed the Philiistine’s champion makes him a champion (or a champion of champions!).
Like Goliath, David was prepared to defend the cause of the God, the Armies and the people of Israel.

Each man was a champion, believed in his cause and defended his cause by his words and actions. Also note that both men did not become champions in one day, but as a result of a learning process. In verse 33, Saul describes Goliath as having been a man of war from his youth, and David, in verses 34 – 36, described how he had also learnt and demonstrated his ability to defend his causes.

This is where the similarities between the two champions ends. David had a edge which changed the equation considerably. His trust was in the God of gods!

David replied to the Philistine, “You come to me with sword, spear, and javelin, but I come to you in the name of the Lord of Heaven’s Armies—the God of the armies of Israel, whom you have defied. Today the Lord will conquer you, and I will kill you and cut off your head. And then I will give the dead bodies of your men to the birds and wild animals, and the whole world will know that there is a God in Israel! 1 Samuel 17: 45 – 46 NLT

So this Valentine’s Day, like Goliath and David, purpose to defend a cause you believe in – the cause of marriage by demonstrating your love to your spouse and making a personal commitment to protect your marriage. Learn about ways to continually improve yourself and above all…do this by keeping your eyes on Jesus, the champion who initiates and perfects our faith. – Hebrews 12:2 NLT